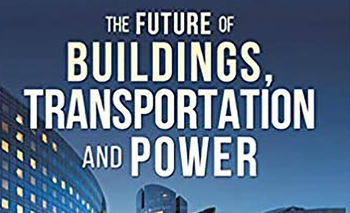 Join ND Energy for a book review and discussion on The Future of Buildings, Transportation and Power by Roger Duncan and Michael Webber. Contact Koby Keck for the Zoom link to join. All are welcome!

Most people have fantasized about stepping into the future, if only for a moment. Will there be flying cars? Will buildings be sleek, "smart," and clean, or will they be just one more dysfunctional component of a decaying infrastructure? Will there be robots everywhere? Will we have clean energy and clear skies or polluted air and water?

The evolution of buildings, transportation and power will determine how our future looks and feels, and in this book Roger Duncan and Michael Webber argue the Energy Efficiency Megatrend will shape our future technology. Buildings and vehicles will evolve into sentient-appearing machines such that we will be living, working and moving about inside robots. Buildings may develop personalities and the transportation system will have any manner of vehicle available at a moment's notice. This complex, interconnected system will be powered by the clean and efficient conversion of fuels and energy flows that surround us. Duncan is a former Austin City Council member and former General Manager of Austin Energy, the city's municipal electric utility. Webber is the Josey Centennial Professor of Mechanical Engineering at the University of Texas, and Chief Science and Technology Officer at ENGIE, a multi-national energy services and infrastructure company.

Roger Duncan is a former Research Fellow at the Energy Institute at the University of Texas. He is the former General Manager of Austin Energy, the municipal electric utility for Austin, Texas. Prior to that, he served as executive manager for several City of Austin departments. Roger was also elected to two terms as Austin City Council member in the early 1980's. In 2005, Business Week magazine recognized Roger as one of the 20 leading "carbon reducers" in the word, and in 2009 National Geographic recognized him as an international thought leader in energy efficiency.

Dr. Michael E. Webber is based in Paris, France where he serves as the Chief Science and Technology Officer at ENGIE, a global energy & infrastructure services company. Webber is also the Josey Centennial Professor in Energy Resources at the University of Texas at Austin. Webber’s expertise spans research and education at the convergence of engineering, policy, and commercialization on topics related to innovation, energy, and the environment. His latest book Power Trip: the Story of Energy was published May 7, 2019 by Basic Books with a 6-part companion series that aired on PBS, Amazon Prime and iTunes starting Earth Day 2020. His first book, Thirst for Power: Energy, Water and Human Survival, which addresses the connection between earth’s most valuable resources and offers a hopeful approach toward a sustainable future, was published in 2016 by Yale Press and was converted into a documentary by Alpheus Media.  He was selected as a Fellow of ASME and as a member of the 4th class of the Presidential Leadership Scholars, which is a leadership training program organized by Presidents George W. Bush and William J. Clinton. Webber has authored more than 400 publications, holds 6 patents, and serves on the advisory board for Scientific American. A successful entrepreneur, Webber was one of three founders in 2015 for an educational technology startup, DISCO Learning Media, which was acquired in 2018.  Webber holds a B.S. and B.A. from UT Austin, and M.S. and Ph.D. in mechanical engineering from Stanford University.  He was honored as an American Fellow of the German Marshall Fund and an AT&T Industrial Ecology Fellow on four separate occasions by the University of Texas for exceptional teaching.

This will be the first of two discussions. Session two will be announced soon.