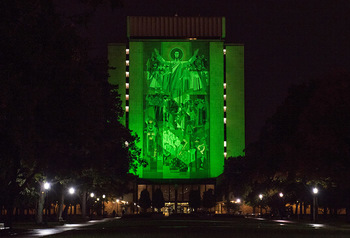 In commemoration of the 50th anniversary of Earth Day, the lights on the Word of Life Mural of the Hesburgh Library will change to green for the week of April 20th.  The first celebration of Earth Day occurred on April 22, 1970, and is credited with launching the modern environmental movement.  Since that day, it has been recognized as the planet’s largest civic event and led to the passage of many landmark environmental laws in the United States.