Title: The Consistency of Pesticide Effects on Freshwater Systems. 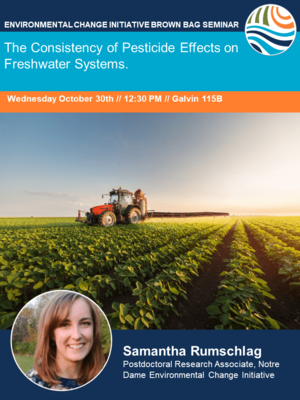 Abstract: Freshwater systems are the most biodiverse in the world and provide important ecosystem services to humans, yet these systems are globally imperiled because of widespread pollution of thousands of synthetic chemicals. Predicting the ecological effects of contaminants on freshwater systems remains a challenge because of the sheer number of contaminants, including pesticides. A central objective of my research is to evaluate if the effects of pesticides on freshwater systems are independent of each other or if they share some consistencies. Overall, we see that the effects of pesticides on parasite transmission, community structure, and ecosystem function are consistent within pesticide chemical class (those that share similar chemical structure) or pesticide type (those that share similar targets in the environment). My research suggests that an enormous amount of complexity in risk assessment could be reduced by considering a smaller number of chemical groups.